I’ve been hearing a lot lately about amber teething necklaces, especially in mom groups on Facebook. I am extremely skeptical of these necklaces, as I am anything that makes money off of parents desperate to keep their children from suffering. So I decided to comb through the internet and collect some information. Once I did that, I realized there were some important and simple tests missing that I could do at home.

Let’s start with the claims made by amber teething necklace manufacturers. They claim that Baltic amber is made of succinic acid, and that body heat causes oil containing this acid to be released from the amber. Once released, the succinic acid is absorbed transdermally into the bloodstream reducing inflammation and pain from teething. It seems to me that each of these claims would be rather easy to test.

I don’t have a chemistry set-up in the dungeon, so I had to look up the succinic acid claim. It turned out that Baltic amber does, in fact, contain succinic acid. It can be up to 8% succinic acid. Claim number one is totally true. So I got myself some certified authentic Baltic amber teething necklaces for further testing.

The easiest claim to test at home was the claim that oil is released from the necklaces with body heat. To test this, I purchased two different certified authentic Baltic amber teething necklaces. I purchased the Mama Natural brand that was linked to from many of the supporting websites I checked out, and I purchased a Powell’s Owls brand necklace that was suggested by Amazon. The Mama Natural necklace claimed and appeared to be raw amber, while the Powell’s Owls necklace appeared to be polished amber. Both necklaces came with certificates that they were made from authentic Baltic amber. 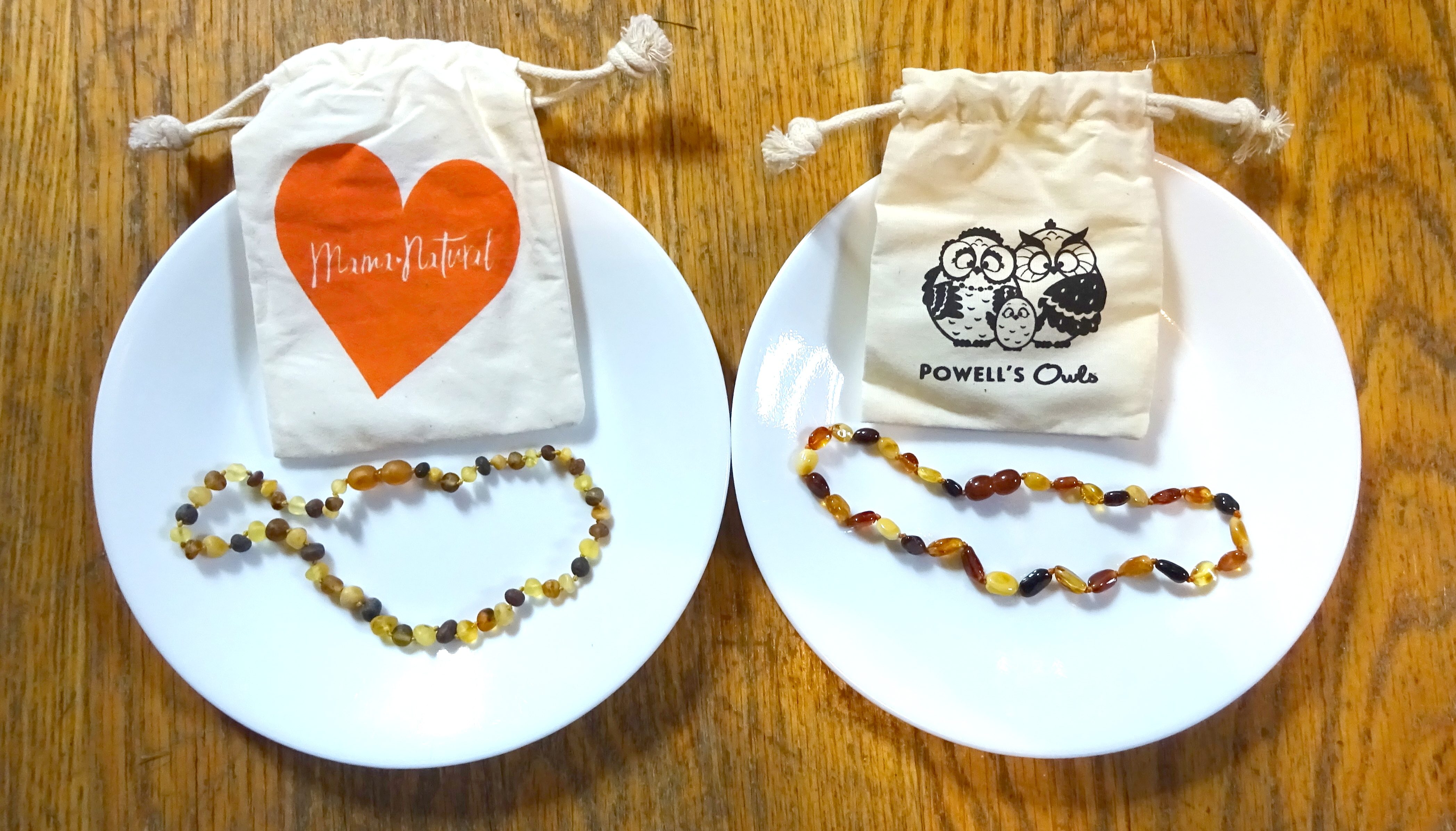 The necklaces that were tested.

The certificates of authenticity that were packaged with the necklaces.

If the amber releases oil due to body heat, then it should release oil in an incubator at 37C. Cue the janky incubator in the basement. I placed each necklace on two pieces of rice paper on a non-absorbent surface. If oil is released, then the rice paper will absorb it and it will show like when you blot your face. 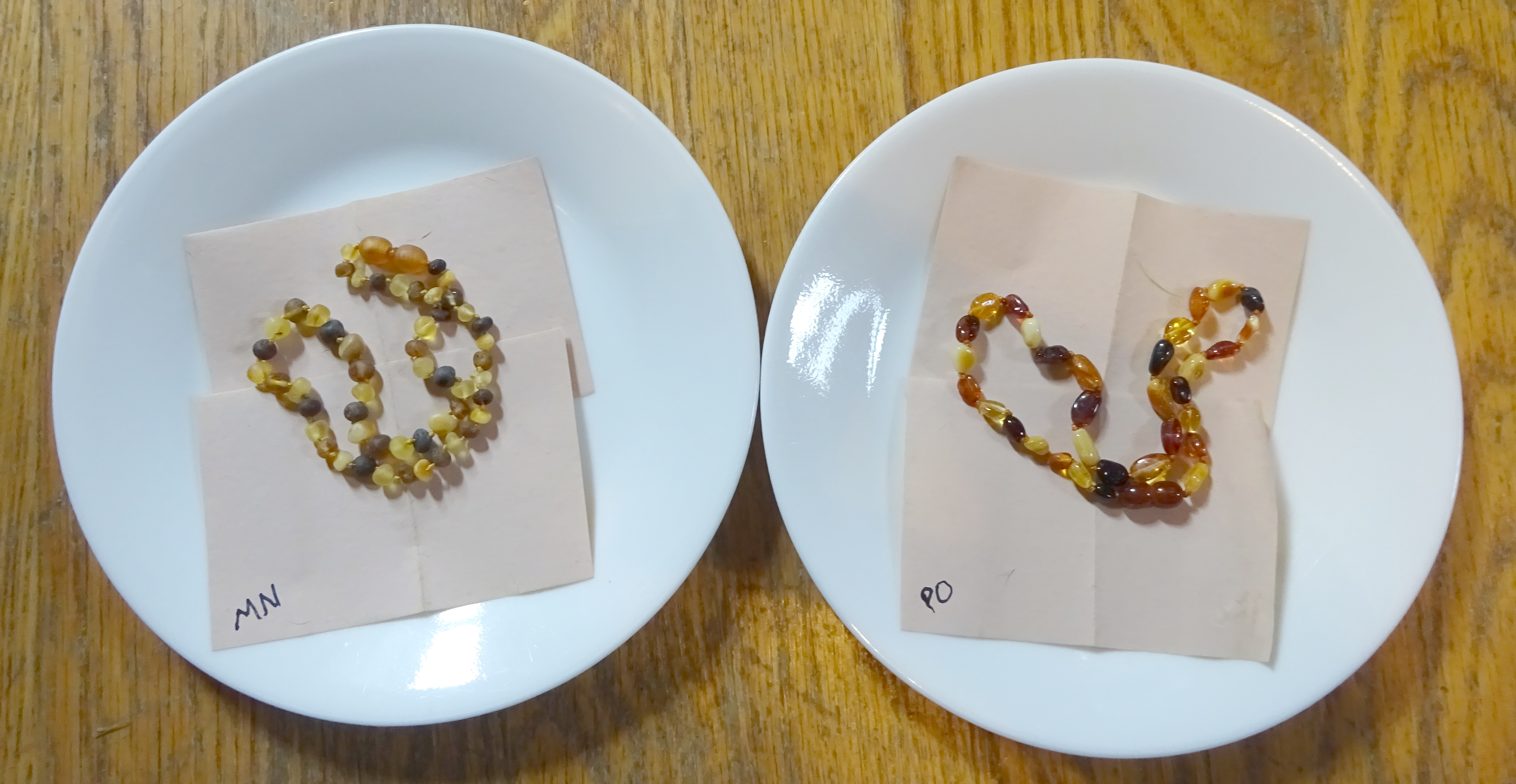 Necklaces on rice paper before going into the incubator.

I placed the plates with rice paper and necklaces in the incubator at 37C for three days. I checked intermittently, usually three times a day, to make sure there wasn’t oil being absorbed and then disappearing. At the end of the three days there had been no indication that any oil had been released from either necklace. 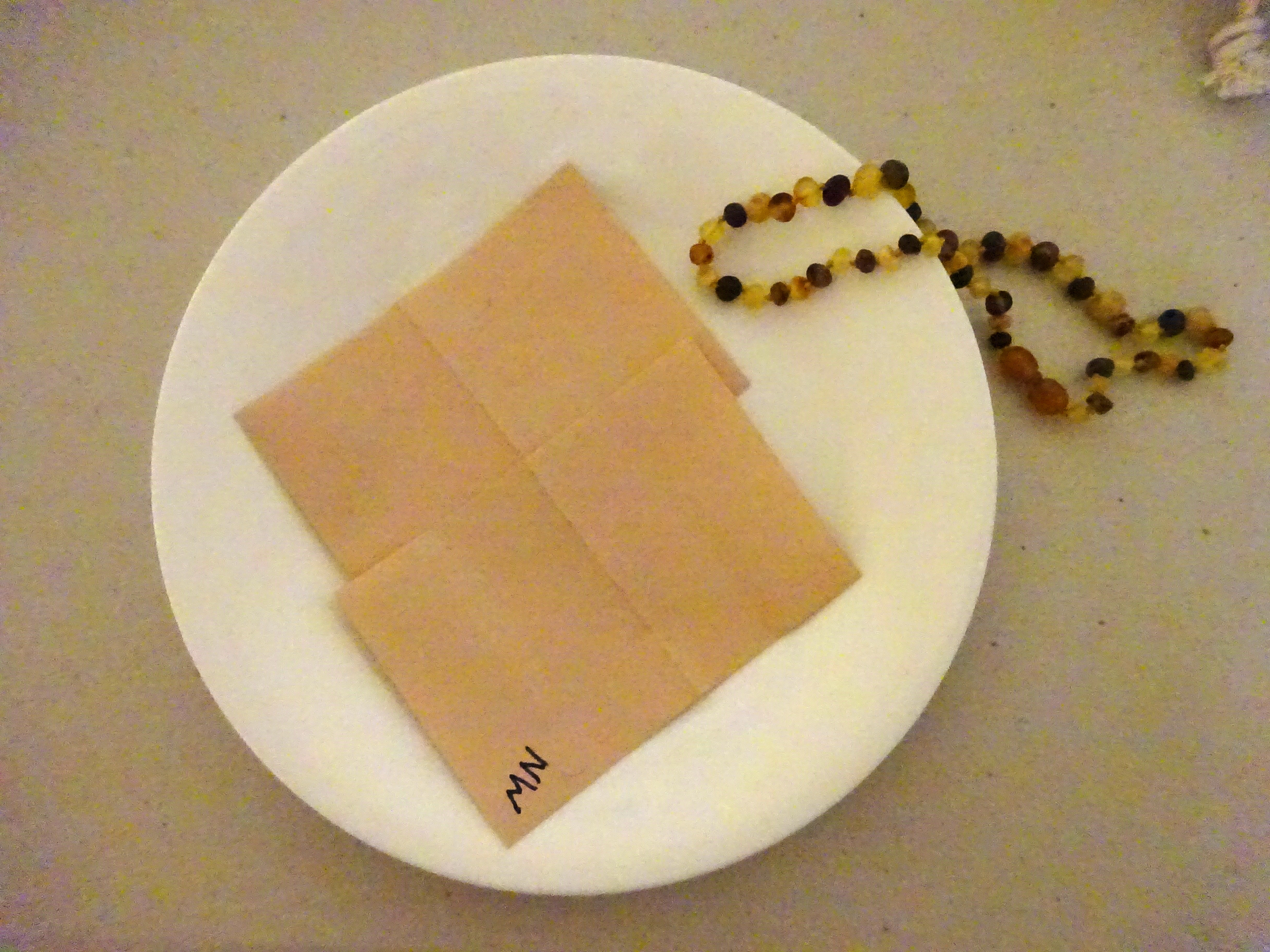 Mama Natural rice paper after three days in the incubator. 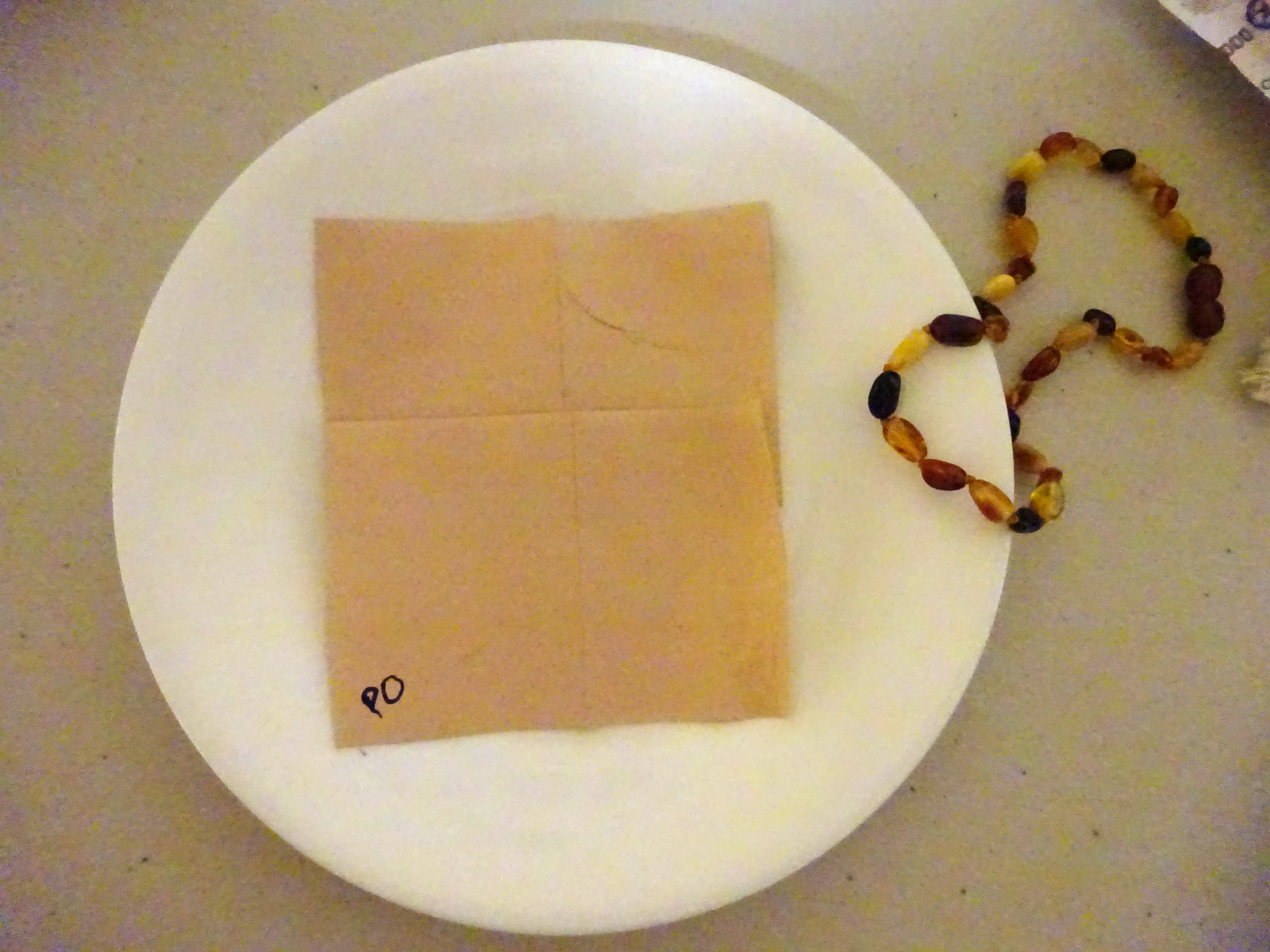 Powell’s Owls rice paper after three days in the incubator.

I’m pretty confident in saying that the amber on these necklaces did not release oil at body temperature.

So maybe you think that I didn’t replicate the test enough or didn’t test enough necklaces or some other flaw that makes you question my results, so let’s do some math. The Mama Natural necklace weighed 4.77 g, and the Powell’s Owls necklace weighed 4.15 g (before and after incubation further suggesting that no oil was released). I’ll just ignore the string and assume most of the necklace is amber. Let’s use the larger of the two for calculations.

Another consideration is that the succinic acid is supposed to enter the blood stream transdermally. In order to get medication through the skin, transdermal patches must contain much more medicine than enters the blood. For example, Buprenorphine patches (Norspan) contain 5 mg of medicine to release a total of 0.84 mg.

Even without considering the fact that there is no hard evidence that succinic acid does what these necklaces claim, there just is not enough succinic acid in one necklace, or six necklaces, to produce the claimed effects in even a four month old. It’s yet another way to prey upon a demographic that is overwhelmed and just wants to take their babies’ pain away. Please don’t give money to charlatans, and let your friends who have good intentions know that these necklaces are just not effective. Let your baby chew on a cold washcloth or a teething ring, wear a silicone necklace for them to chew, use tylenol if they’re in a lot of pain.

Note: The AAP considers amber teething necklaces both a strangulation and choking hazard.